"Yang is about changing the world; yin accepts the world as it is. Neither is better than the other. There are...times when it is...necessary to change the world; other times, it is best to just allow things to unfold. -Bernie Clark" 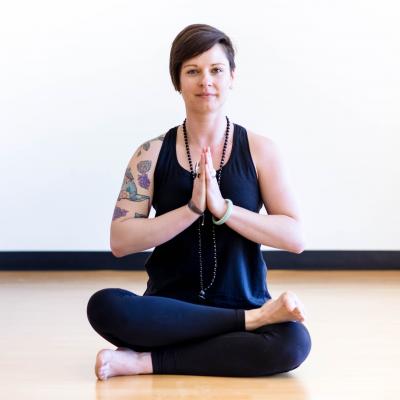 Liz first tried yoga as a kid, attending chair yoga with her grandma at the local senior center. While she was always intrigued by yoga and meditation and dabbled in it from time to time, it didn't become a regular practice until she found herself struggling with stress, anxiety, depression, and burnout from a high-pressure job. Yoga started as a means to escape and relax while getting a workout and became Liz's passion. Uniting the body and mind through movement, breath, and focusing on the moment helped her cope with stress outside of the studio and become calmer, healthier, and generally more pleasant to be around. After a few years of dedicated practice and exploring many different types of yoga, she knew she wanted to delve deeper and share yoga with others. She received her RYT 200 certification in 2015, followed by a hot series training in 2016, yin yoga trainings in 2017 and 2020, and is finishing up the final requirements for a 300-hour training in vinyasa, yin, restorative, yoga nidra, adaptive, and prenatal yoga. She focuses her teaching on yin yoga, yoga nidra, and restorative yoga, and occasionally teaches the hot series, vinyasa, and chair yoga. Liz is known for her calming presence, authenticity, and positivity. She believes in the power of shared experience and that everyone needs yin yoga. Lately, she has found joy in teaching yin to those who might not think of themselves as "yoga practicioners," including at a CrossFit gym (yin is an excellent complementary practice for weight-bearing exercise!) and new sheriff's deputies (providing tools for breathing before reacting).

Master of Arts in Sociology

Bachelor of Science in Sociology, Honors