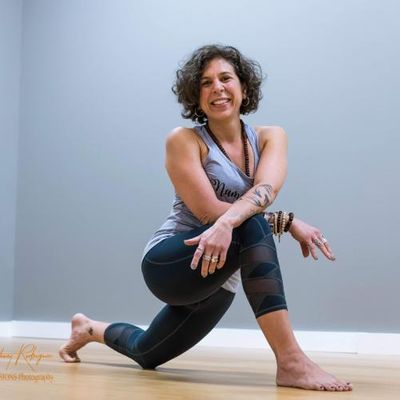 Hope is not enlightened (not even close) and she can’t get into every pose. Hope walked out of her first yoga class in the fall of 1997.  She returned to the mat in 1999, and in 2004, began deepening her learning by enrolling in the yoga immersion and instruction offered through ViraYoga in NYC.  Hope’s practice remained strong, but she only began teaching yoga publicly after traveling to Upper Bhagsu, India and studying Hatha Yoga and meditation in 2014.  Hope enjoys weaving yoga history, philosophy, and mythology throughout the asana practice. Hope makes tons of mistakes, laughs at her own jokes, accepts her nerdy nature and can often be found teaching or practicing yoga while chewing gum. She can be found teaching kids yoga and mindfulness techniques through her school-based program, TexasYogini, or working on puzzles, drinking coffee, and seeking sunshine.  Hope believes the benefits of the practice are available to all who seek.